Hey OH GREAT SUPER AWESOME Community I am back with a review for Justice League vs. Teen Titans! HOPE YOU ENJOY IT!

Please Be Advised there are slight SPOLIERS !

To be completely honest the movie was pretty good and I recommend that you watch!

The story line for the movie is the amazing Trigon story line. For all those unware of who Trigon is and how he ties into the Teen Titans here is a tiny exposition. Trigon and or Trigon the Terrible is an interdimensional demon with great mystic power, he seeks to conquer universe one planet at time. This process is normally done by his spirit partially being summoned to impregnate a world’s inhabitant. Once the child is conceived the child acts as a portal or is able to open a portal inviting his entire being into the world for perspective conquering and or destruction. Raven the titan’s mysterious magic mistress is his daughter and his way in to earth.

Finally we are seeing the Teen Titans on screen again in a more powerful light since the heartbreaking 2003-05 animated series ending (which is the best of the best no the Teen Titans Go! Nonsense “slight shade”) 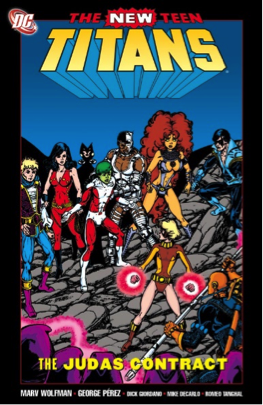 The Use of The Judas Contracts: The Judas Contract (“was a four-part storyline originally printed in issues #42-44 of Tales of the Teen Titans and concluded in the 1984 Tales of the Teen Titans Annual. The story was written and edited by Marv Wolfman and George Pérez with artwork by Pérez, Romeo Tanghal, Dick Giordano, Mike DeCarlo and Adrienne Roy. Lettering was provided by Ben Oda, Bob La, John Costanza and Todd Klein.”) seen at the end of the movie with the arrival of Terra. This signifies the introduction of Slade (more than likely still salty from Robin (Damien Wayne) trouncing him in “Son of Batman”) into the Titan world along with H.I.V.E!

Damien Wayne has a great emotional evolution and or character development! He is finally gaining something called human emotions, shaking that cold hard exterior. It’s a slow process but it’s coming along well. I’d expect this to expand further once Slade makes an explosive entrance.

The clear hinting that a relationship has happened or is ongoing between Starfire and Nightwing (Dick Grayson) now.

Cyborg’s dual membership for both the Teen Titans and the League.

The Voice Actors: The voice actors are amazing! Unnecessary/Necessary shout out to the New 52 League, I am very delighted with how they are taking these characters and making them their own.

Special shout out to the Teen Titans voice actors: Brandon Soo Hoo (Beast Boy), Jake T. Austin (Blue Beetle), Kari Wahlgren (Starfire) whom surprised me, and are beginning to grow on me especially Raven’s Voice actor: Taissa Farmiga , she really did her thing transforming the character to suit her style.

Super Special Shout Out! To the voice actor for TRIGON: Jon Bernthal, I will admit I was a doubter, I couldn’t picture anyone besides 2003-05 Trigon voice actor: Kevin Michael Richardson (who is without a doubt the best I’ve trigon I’ve ever heard!!!) to do the character justice however I was wrong ! Jon Bernthal has done an excellent job and added his own flare to bring this new Trigon to life!

The Bad: The movie felt a little rushed, I being a huge (beyond huge) fan of the 2003-05 animated show expected something extremely close to if not the exact same version of the titans. Crime fighting, struggle, and comedy bringing them closer together to form a family. This movie however gave you a forced Hogwarts love story feel instead. Here you have Damien Wayne “Son of Batman” fresh out of “Batman Bad blood” struggling to resist his assassin foundation on site with the New 52 League members Superman, Batman, Wonder Woman, Cyborg (former titan), and The Flash (Excluding Green Lantern and Aquaman) battling the Legion of Doom.

Misunderstood kid clique is kicked up by a thousand once Damien doesn’t follow orders resulting in he being forced into the titans under the recommendation of Dick Grayson (founding member of the titans) to better understand the value of team work and by extension becoming a better team player. (Which I find slightly hypocritical since his father is the lone wolf “part-time leaguer”) 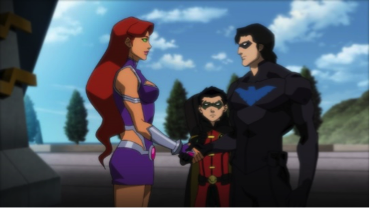 The love story kick’s in once Damien meets the titans: Beast Boy, Blue Beetle, Starfire and Raven, more specifically Raven (who is in my top five favorite DC Characters if I may be so bold) I am totally against this relationship due to the massive shipping of Beast Boy and Raven !

Dick Grayson should be seen more often in the movie, he above anyone else would have a better chance of guiding Damien. He would also have over flowing reservoirs of information for the other titans being a super hero since he was twelve years old.

Forced bestfriend chemistry between Blue Beetle and Beast Boy will never replace the chemistry Beast Boy and Cyborg had, but the attempt was decent.

Starfire, Beast Boy and Blue Beetle transformations into their costumes looks like something straight out of Sailor Moon.