Hi Guys! It’s time to talk about one of my favorite things in this galaxy or a galaxy far, far, away. That’s right, I’m here to talk Star Wars, or more specifically, the first of the new Star Wars “Stories:” Rogue One.

The short version of this review: I LOVED IT!

Now for the longer, mostly spoiler free, version: I think going into this a lot of people were confused. I believe casual watchers were expecting another of the episodic movies that we’re all used to. Movies about the force and those who can wield it. But this wasn’t that kind of movie and you could tell from the opening scene which lacked the familiar Star Wars crawl. No, this movie was not about prophecies and ‘chosen ones’ it was about ‘ordinary’ people and the brutal tragedy of war. It was about people fighting to their last breath against an enemy that seemed impossible to beat. It’s real and gritty in a way that the other more episodes aren’t. In other words it’s not as black and white as the other movies. The lines between good and evil are not as clearly drawn. This movie is about personal choices and ideology and the belief that the actions you take will put you on the right side of history. 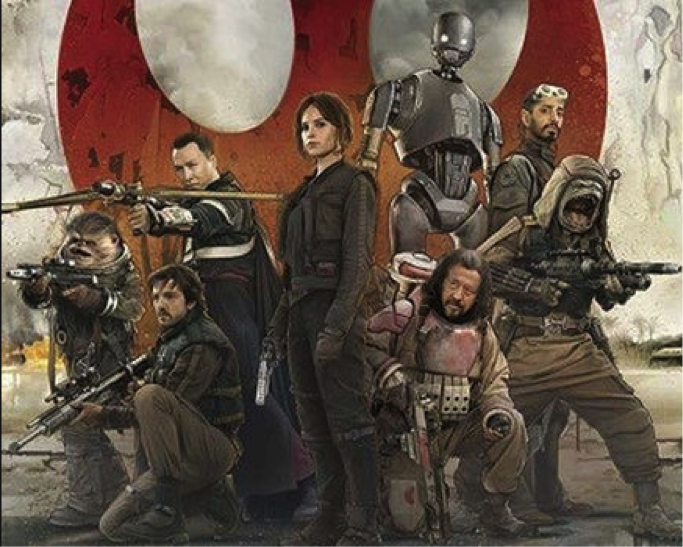 To emphasize those differences, this time, instead of following the standard Star Wars pattern of 3 distinct heroes and one main villain we’re introduced to an entire group of characters who each start out just going through the motions because they don’t know what else to do at this point. This motley crew each has their own clearly defined role and yet they blend together seamlessly and no one gets forgotten. We have our imperial pilot who has defected to the other side, our BFFL warriors who seem like total opposites but honestly just complete each other, a droid so salty I’m surprised he didn’t rust and yet managed to show some real emotion and pull on all of my heart strings, the prodigal daughter who’s everyday life is so difficult that she believes she has no time to waste on lofty ideals or in fighting a war that doesn’t directly affect her, and the Captain of our little group who has spent his whole life following orders because that’s just what you do but still manages to grow and learn and think for himself. Each character felt fleshed out and independent and they each showed growth and range which allows viewers to become attached. And it’s that attachment which made the ending so bitter-sweet and poignant. Something which could have felt extremely depressing ended up feeling deeply appropriate. There was a sense of victory and rightness that occurred at the end of the battle and I believe that it gave fans a new depth of understanding about the cost of war and the sacrifices that were needed in order to make A New Hope possible.

I also felt that this movie managed to take the best parts of both trilogies (yes, the prequel trilogy had good parts and I will argue with you to the death about that) and combine them almost flawlessly. The only part of the entire film that I’m on the fence about is the CGI people. On the one hand, I understand why they did it, it was a nice tie-in and throwback, and for some people it was needed to once and for all clear up this story’s place in the larger Star Wars universe. On the other hand, I do feel like it added just a little bit of fakeness to what otherwise was a very believable film.

So overall I give this movie 5 stars. I believe it works well as a standalone story but becomes truly elevated when you take into account its place in the larger series.

You can follow Daphnium on twitter @daphnium. We’d love to hear from you guys so please leave comments below. Until Next Time!!!